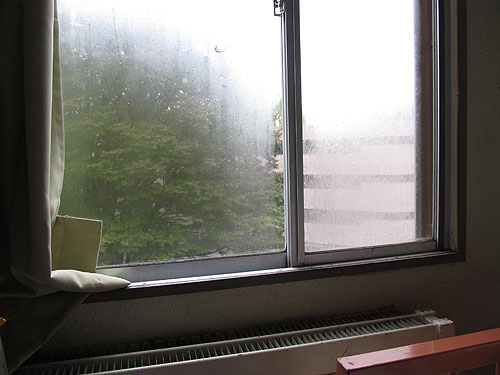 Or Tsukuba University Culture/Arts festival if you prefer it that way. I have never really understood what the difference is between a bunkasai and a gakuensai, because they look pretty similar to me. Both of these events have food stalls and specialized cafés, different exhibitions and display rooms, and different performances led by various school clubs to promote their activities etc. So I really have no idea how the two things are supposed to be different and even if they are meant to be different. Perhaps there are just several names for a similar event?

Anyhow, in Tsukuba University it was called a bunkasai and I suppose there were a tad bit more art performances and such happening, but that might be just because they actually have an art department here. Anyhow, we mostly walked around to see what people were up to and mostly it seemed that they were up to selling you food and lots of it. At first it was kind of funny having them try and lure you to their stall or watch them chatting up other potential customers, but at some point it became more annoying than fun, because if you glanced at one of their stalls for more than a second, people dashed over to you exclaiming: “Hey, hey, would you like to eat this? Come and eat at our stall!”
Me: “Sorry, but no thank you.”
Them: “Oh come on, please come and buy our food!”
Me: “No, no I already ate…”
Them: “Are you sure? It’s really tasty! You really should come and try some!”
Me: “… no. Sorry, but no.”
Them: *disappoint*
And this happened almost near every stall… It was really uncomfortable for me to have to refuse their offers and try to get away. All I wanted to do was walk around and see what’s happening, but eventually I ended up just trying not to draw any attention to myself and trying not to make eye contact with anyone. I did however eventually eat delicious yakiudon and kinako mochi, so I was pretty happy in the long run.

We didn’t go to any specialized cafés even though there were many to choose from (among them were a gay bar and a maid café), but we did visit a bug exhibition (that a very geeky looking guy with charming bug antlers told us about) and we stayed to watch the performances on the main stage for a while. Oh and I got a caricature-esque portrait drawn of me xD But of that a bit later…

The next day we did go to a Russian themed food café that Maarja’s friends were doing, because pirogi and borscht sounded kind of good. But that visit was a complete failure for me. When we got there and lined up, the Japanese(?) girl behind the counter unexpectedly turned to me, speaking in Russian. At first I didn’t even register that she had spoken to me in another language other than Japanese. I was just thinking that I simply hadn’t understood her for some reason… I only got it when Maarja finally clarified to the girl that her friend (that being me) didn’t speak any Russian xD Okay, that was that. But after that initial encounter I was simply ignored by the people standing behind the counter. I’m really not the type of person to demand for attention when other people seem to be busy with something, but after a while of just standing there and waiting for someone to take my order, my anxiety kicked in and I just decided to give up and leave. So that was that for me. Went home and cooked my own lunch. 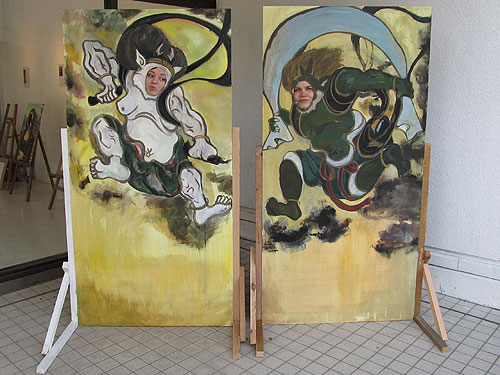 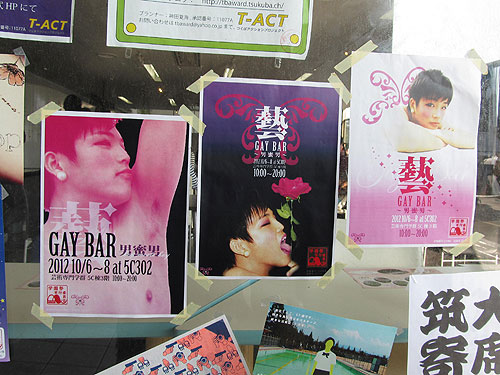 Posters for the Gay Bar 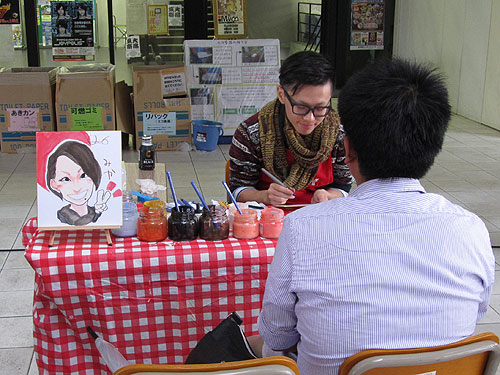 The artist who eventually drew a picture of me 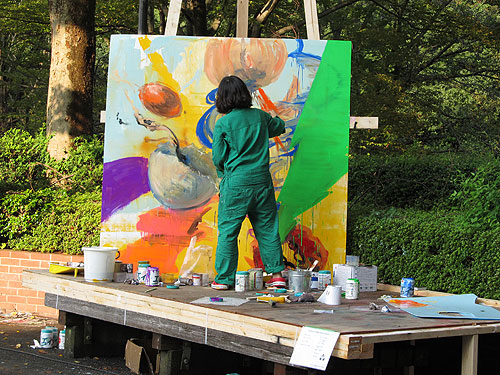 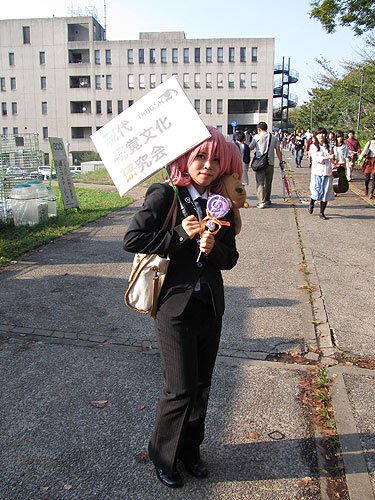 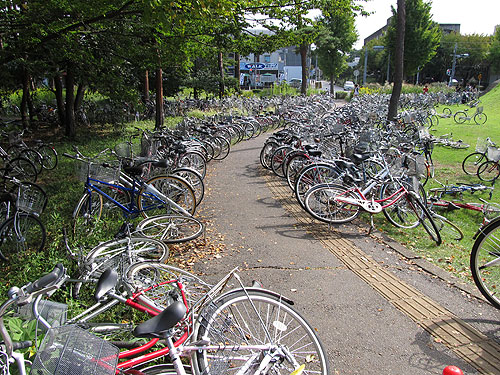 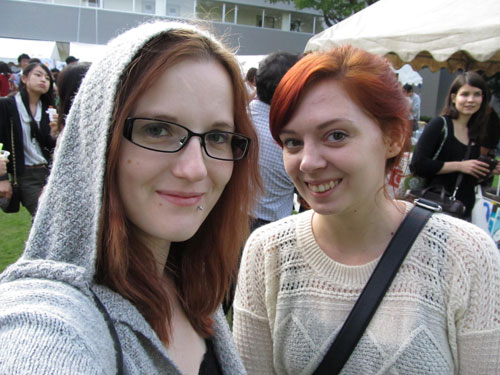 I was there with Sanna… 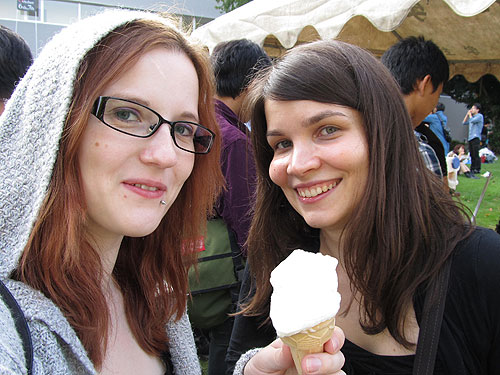 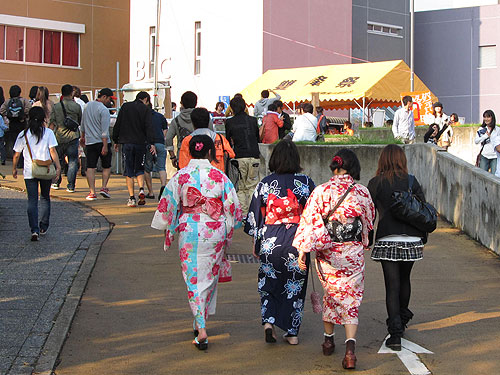 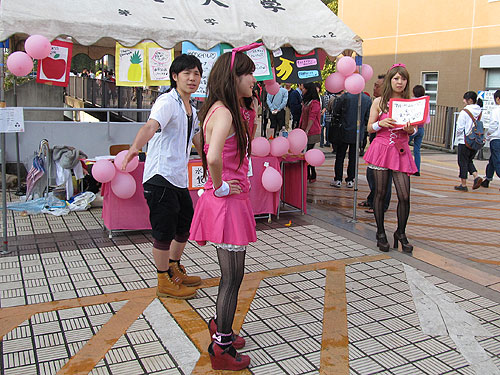 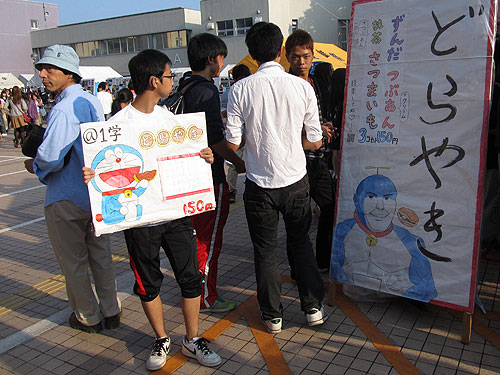 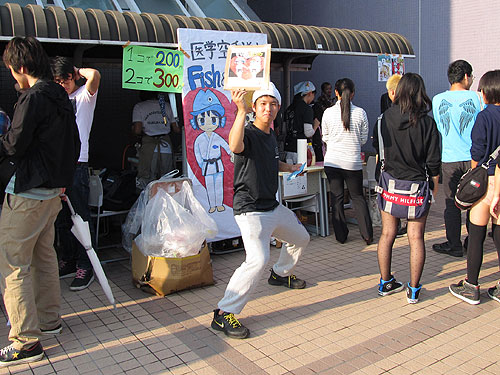 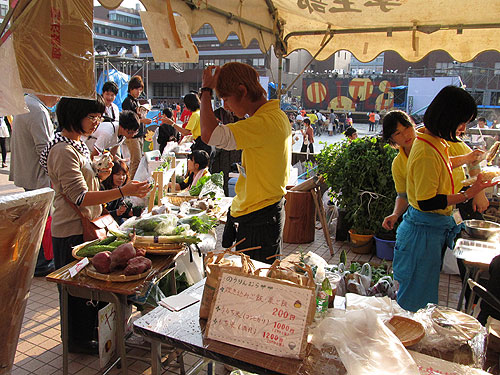 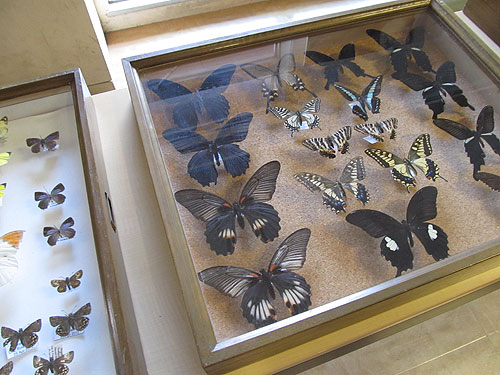 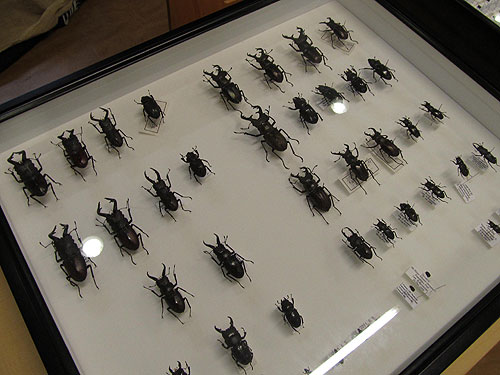 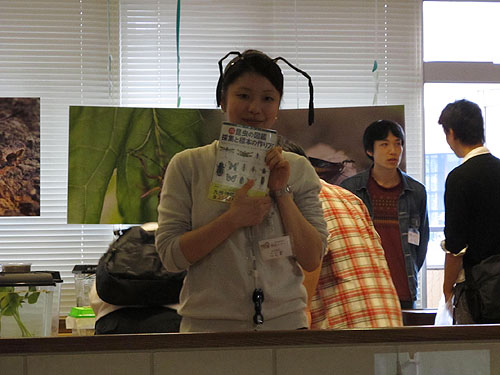 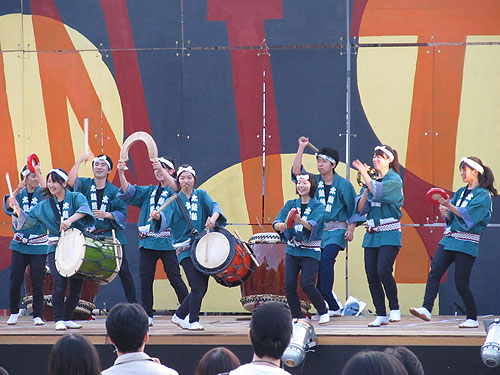 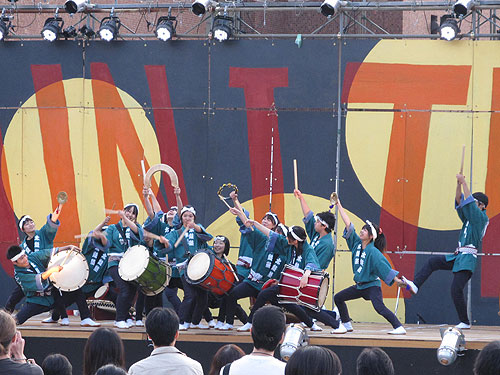 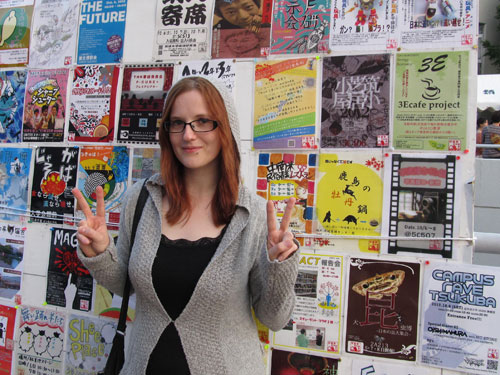 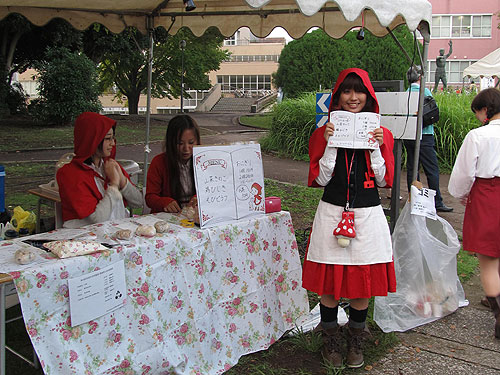 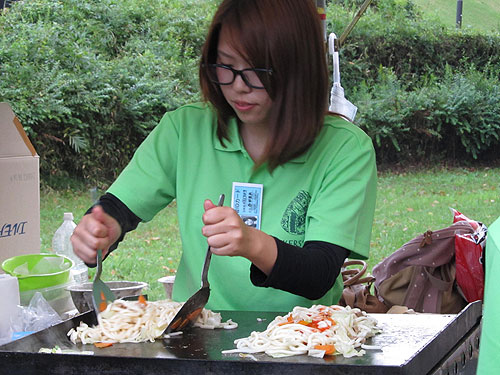 My food being cooked 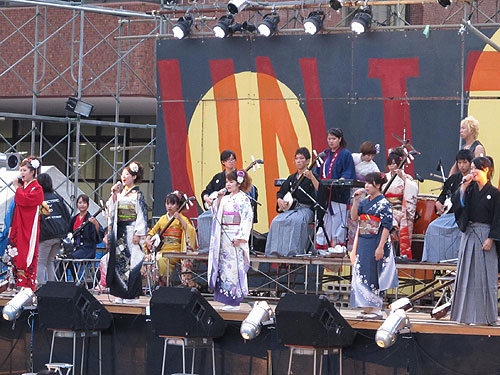 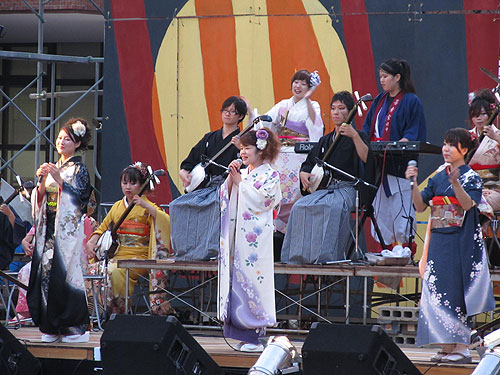 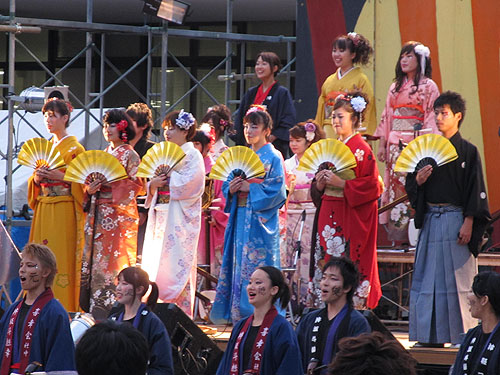 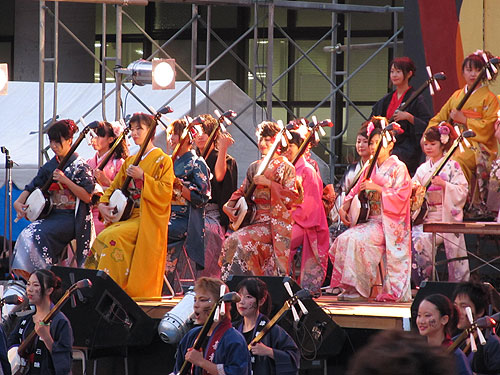 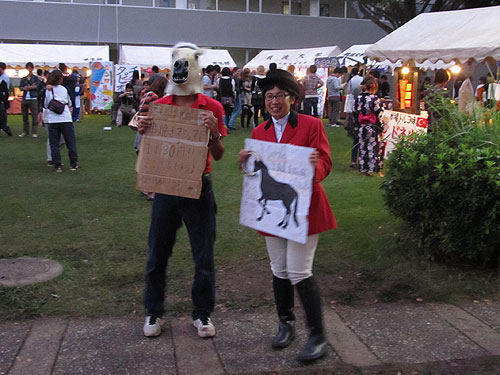 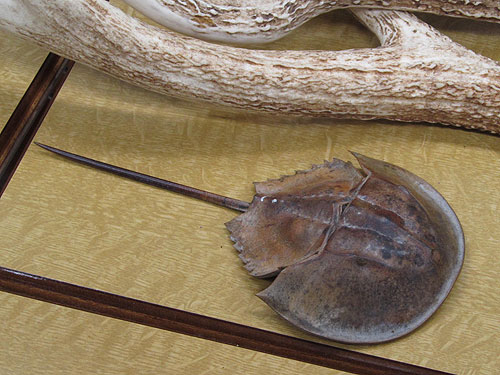 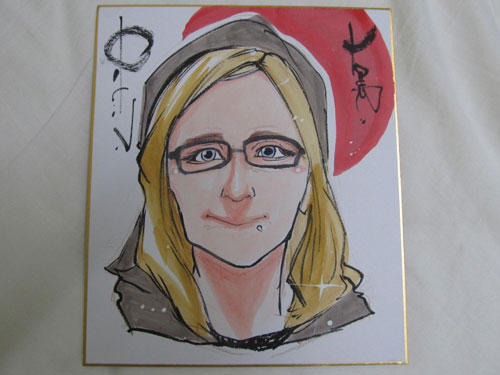 My portrait xD My boyfriend thought it was a good morph of me and him xD
And whatever I try to claim, for the Japanese people my hair is blonde. Never red, not even brown. Always blonde.