Kadi came to visit and she brought green tea cake and cookies from Killuke Kooki 😀 We had them with some peppermint tea. That cake was so so so good!

Had about 1,5 bottles of beer… maybe a bit more.

We had fun assembling some Japanese DIY candy kits. This one was called “Nyokonyoko Kororon” or as we called it “creepy candy wormies” xD The candy tasted weird and I didn’t like it much. It was fun to make though :p

This is a short vid of how the wormies were made:

This candy kit was “Kurabete Neruneru”. The green goo was melon flavoured and the yellow one was pineapple flavoured. We both really liked the pineapple taste.

Poppin’Cookin’ “Tanoshii Raamenya-san” aka “Fun Ramen Restaurant” ;D This was epic fun to make. It actually looked like real ramen and gyoza xD The gyoza tasted really nice too, the ramen had a weird texture, but didn’t taste bad.

Soy flavoured senbei that also went great with the beer

Tasty chickpea soup with feta cheese and assorted nuts and seeds. I followed this recipe to make the soup.

I had a really lovely and fun day with Kadi. The DIY candy kits were hilarious to assemble and after we were done with these, we just chilled with some beer and chattered away about all sorts of nonsense ♥

Oatmeal porridge with a sliced up banana and some fresh raspberry jam; also had a cup of coffee.

A strawberry-banana smoothie, because I was feeling queasy after my workout and I couldn’t find any snacks from the store that were not pastry or sweets.

A soup with macaroni, meatballs and chanterelles plus a dollop of sour cream on top.

Pear chocolate cake with some fresh raspberry jam and a cup of peppermint tea.

The first song in my BodyArt class was “The Hanging Tree” from the movie “The Hunger Games.” Well it was a mix of the song, but I still found myself pretty amused by it and thought it was an odd song to exercise to xD

Also with exercising more I have to take more showers and it has sort of become a problem for me. Usually I shower fully about twice a week, other times I just wash parts of myself in the sink every morning and/or evening depending on the need. It’s pretty normal, because our climate is rather cool. However, it would be unthinkable to go home without a shower after exercising because I am sweaty and gross. Now taking a shower isn’t the problem itself, but it’s my hair, because the more often I wash it the quicker it starts getting dirty. After I started taking a shower every two days or so, I’ve noticed my hair is already getting greasy and dirty looking by the end of the next day after a shower. Before that it was okay for me to go three days and up without my hair starting to look and feel like it could use a wash. I was thinking that perhaps I should get myself a shower cap so I wouldn’t have to get my hair wet every time I shower after working out… but would that be weird? I don’t know, I’ve never seen anyone with a shower cap in the sports club. I’m pretty darn self-conscious with some odd things.

Potatoes with meat sauce, some cottage cheese with green onion and some funny marinated tiny cucumbers

A bun stuffed with wieners and cheese and some green tea

Onigiri (with avocado and mayo), radish salad and miso soup with wakame

I made pea soup for dinner, because it’s a tradition to eat pea soup on Shrove Tuesday in Estonia. Unfortunately I was careless when picking out the smoked ham for the soup in the store. Instead of proper smoked ham I ended up buying fake smoked ham, which means that the “ham” is given a smoked like smell/flavour with a smoke essence

And the soup was inedible, because the taste of that unpleasant smoke essence overpowered everything 😦 Honestly, it was not pleasant at all. That’s three hours wasted on cooking that soup and not to mention the food wasted! Down the toilet the entire pot went 😦

We had no other choice than to run to the store and get some food from the readymade food court for dinner, because it was late and I didn’t feel like cooking again that night. We got some Mulk’s porridge (Potato porridge with pearl barley) and breaded friend beef slices. The food was a tad bit too salty, but still so much better than that damned pea soup. I also had a slice of toasted rye bread with cheese.

A matcha whipped cream and azuki paste semla from Tokumaru and a cup of peppermint tea.

Multigrain cereal with quinoa in milk

I had lunch with Marit and Maarja @ Kohvik August:

Then it was my boyfriend’s company Christmas party:

Snacks with wakame and some other seaweed

Hitachino Nest Red Rice Ale. I had 2 of these.

Miyagikyo single malt whisky, 12 years old. This was pretty good as far whiskies go. This was the most expensive drink on the menu xD

It was a pretty awesome day, first I met up with two of my friends for some coffee/lunch. Our first idea had been to check out the new café next door to my house, but the place changed their opening hours/days overnight and it was closed. After some brainstorming and meandering round old town, we ended up in Café August, which was pretty nice. It was a pleasant rainy afternoon.

In the evening it was my boyfriend’s company Christmas party. First we went to see a play by Cabaret Rhizome in Erinevate Tubade Klubi called “Otsuse Anatoomia” (The Anatomy of Choice). The entire performance was like a choose your own adventure game. The actors performed in front of a green screen and we watched it in small companies from television screens near our tables. After every short while a dilemma rose up in the play, a choice had to be made and this was up to the audience. The choice could be made via a console on the table; sometimes you just had to choose yes/no or beat a minigame with your table to get a certain option. Basically we, the audience, held the power over one boy’s life. The decisions ranged from choosing his name and type of school he attended to whether he would try drugs or not.

The second half of the play we could choose whether we would like to continue the boy’s story or go back to some choice we had made earlier and change it to see a different outcome. The funny part of it all was that we went back and seemingly we made “better” choices for the boy, but his life turned out worse… which seemed shocking to some people, because we had sent him to an elite school this time and given him confidence etc. Some women in the audience were especially outraged about it, because “all my children went to elite school and it’s not like that at all!” Rather a very interesting experience.

After the theatre performance, it was food and dance and lots of alcohol :p I had fun! The only terrible part was that I got splashed with a fair amount of pork lard when getting food, so I stank half the evening 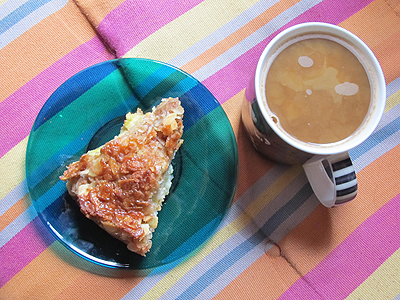 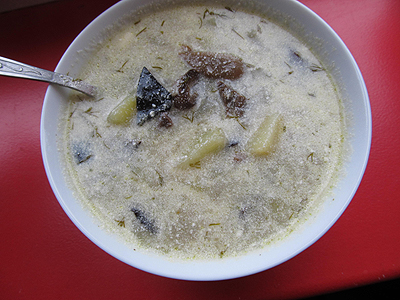 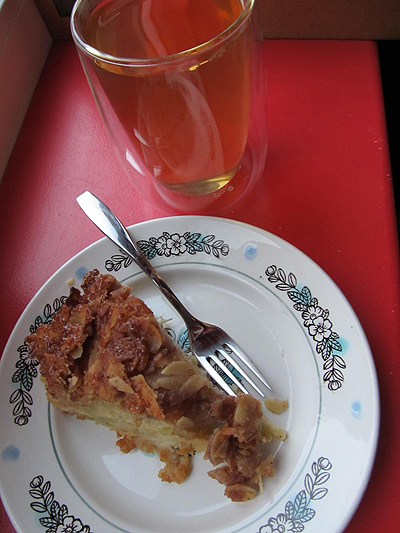 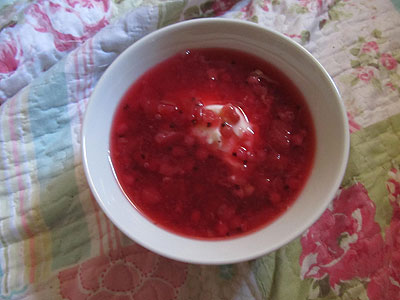 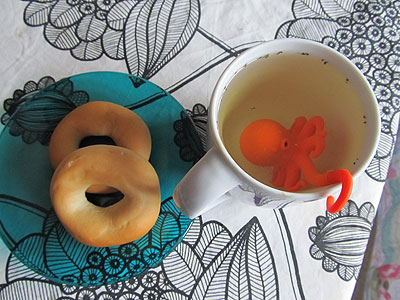 Peppermint tea and a couple of soft baranka’s 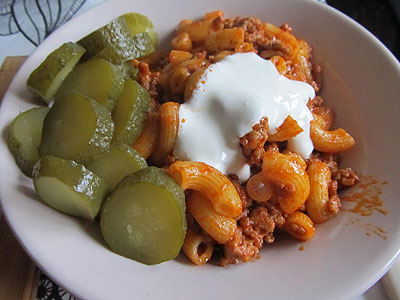 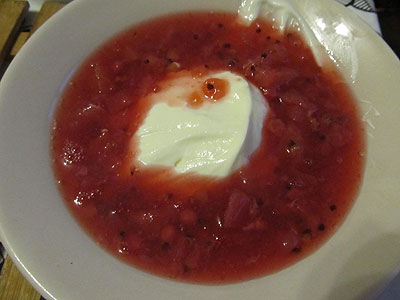 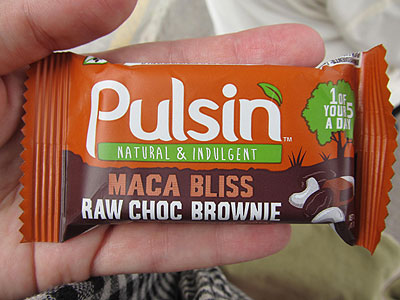 Some sort of energy bar. Meh. 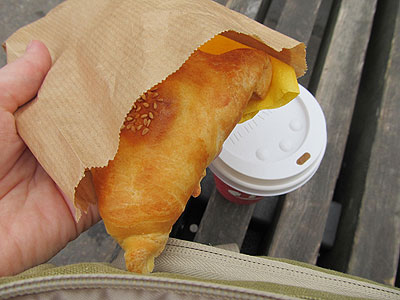 Tuna and bean pastry with some coffee 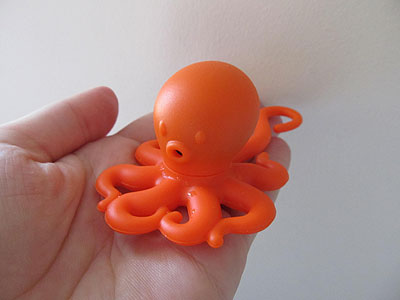 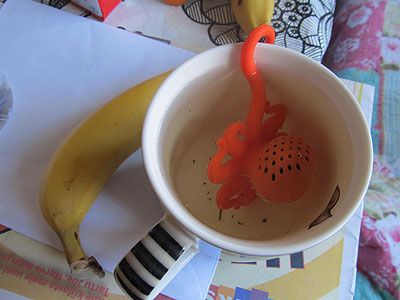 Had some peppermint tea and a banana 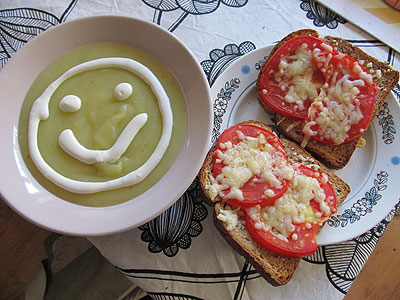 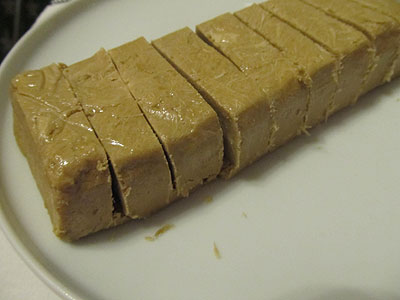